Here are some installations in Gauge-1 locomotives.

Here are some Power On Board (Dead Rail, as the club in Southern California calls it) installations for you to enjoy. 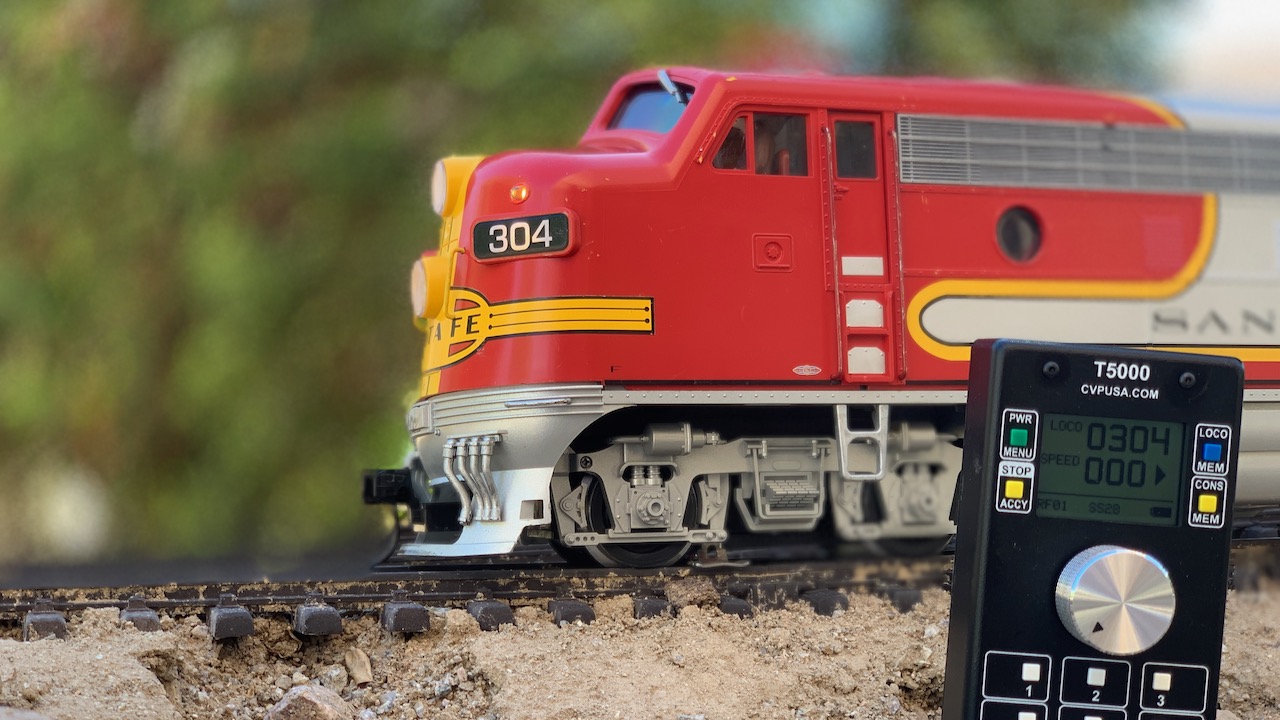 Here is a loco that I built for our club, before we lost our room. When we shut the club down, I bought the loco from the club and did some rework on it.

First, let's look at the installation to use power-on-board and AirWire control. This is certainly not an installation for the faint of heart. I'll be offering some tips and ideas, but not a step-by-step instruction manual.

A tip of the hat to Pete Steinmetz of Dead Rail Installs, my friend and the dealer who supplied the major components.

The cab control and handheld radio is the T5000 from AirWire - I run a lot at night, so I like the backlit version.

First a comment about the battery. I was concerned about battery life. Our club used to run 2 hour open houses. By the time that we tested the locomotives, set up, built the trains and ran the open house, we had several (3 to 4) hours of continuious running on the locomotives. Not wanting to tear down the setup and charge the battery between set-up and open house, I wanted to assure 4 hours of running. So, I bought the largest (6.8 AH) battery AirWire sells. OVERKILL! This locomotive, even with two motors, only draws about an amp running at moderate speed and pulling a few cars. So, I get about 7 hours out of this battery. I recommend the smaller battery, as shown above.

All of the LGB electronics and the speaker were stripped out of the locomotive.

Next, let's talk about the power trucks. This locomotive (circa 2000) has the rail connections tied to the motors INSIDE the trucks. This connection needs to be broken with the motor connection and the rail connection being brought out separately. I wanted to be able to select either rail operation or power-on-board operation. Not that I plan to run it very often on rail power. However, it can be set to rail power and externally programmed with any DCC system - I've even run it with my NCE PowerCab! Once the trucks are modified, the LGB wiring harnesses are connected so that the motors are in phase (both run forward at the same time) and the rail pickups are in sync (same rail is connected between front and rear trucks). At the cable connector in middle of the lead weights, the transition is made from LGB color code to DCC standards: right rail - red; left rail - black; the lead which causes the motor to move the locomotive forward when a positive voltage is applied - orange; the other motor lead - gray. These wires (need to be 24 AWG or larger) terminate in the same battery plugs as the AirWire battery uses. The gender is male for the motor and female for the rail pickup on the frame side. The polarity is such that, if you plug the two connectors together, red and orange connect, as well as black and gray. This way, without the shell, the plugs can connect the motors to the rail pickups and the frame and trucks can operate by themselves on DC.

Here is an overview of the locomotive and how the various components fit into it. Between the cab and the rear of the locomotive there are four bulkheads that snap into place and hold the side windows in place. Some are used to secure the shell to the frame. The front two are used to support the Convrtr and Tsunami, respectively. The rear one is used to hold the battery - via zip ties.

The speaker is screwed to the roof under the vents and stacks detail. Need VERY short screws here to avoid punching through the roof. This speaker generates an ENORMOUS amount of bass energy (down to 80 Hz), so the speaker needs to be very securely attached to avoid annoying rattles and buzzing. How does the sound get out? From the (downward firing) speaker system through the holes in the lead weights and through the speaker opening in the fuel tank.

The rear compartment holds the battery, control switches, connection to the rail (on the frame) and the battery level meter. 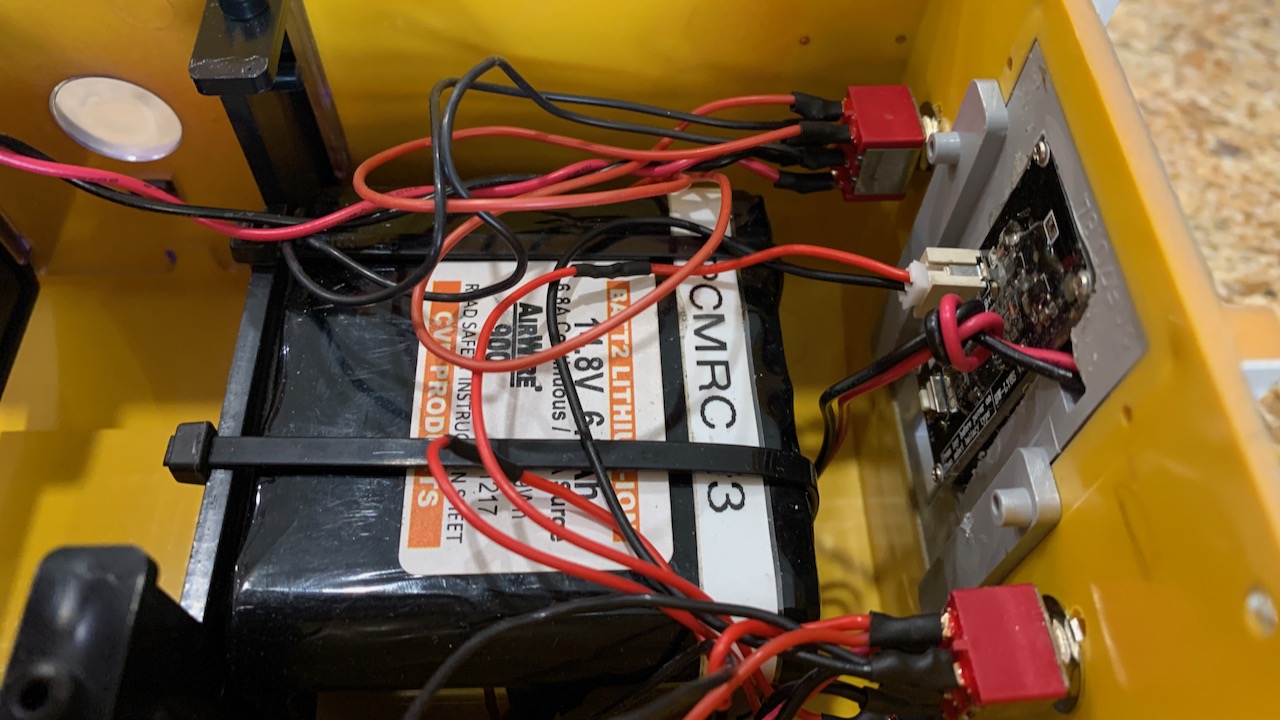 Initially, I left the meter on all the time that the battery was on. This blue light shone out from the rear of the loco and the diaprhagms don't block it. Night running was not pretty. So, I recently added a meter on-off switch in the upper right of the rear bulkhead. 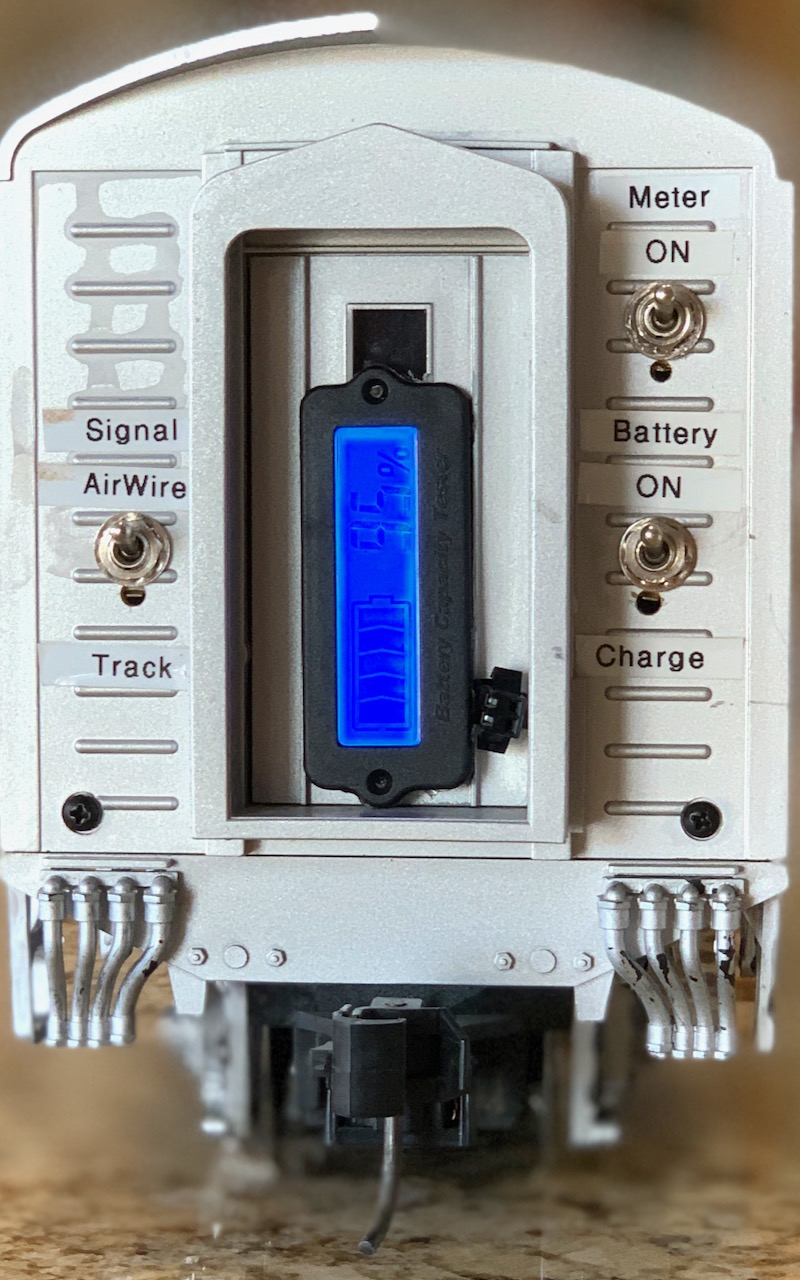 When the meter switch is on, the battery meter reads percentage of charge, unlike earlier meters that I had that read voltage. Much more convenient. The segments switch on and off quicker than the eye can see, but the camera shutter caught some on and some off. The meter is much more readable than shown here. The connector in the lower left of the meter in this orientation (actually lower right of the diaphragm with the loco sitting upright) is connected to the battery when the switch is in the CHARGE mode. Plug a charger in, set the BATTERY switch to CHARGE and go. 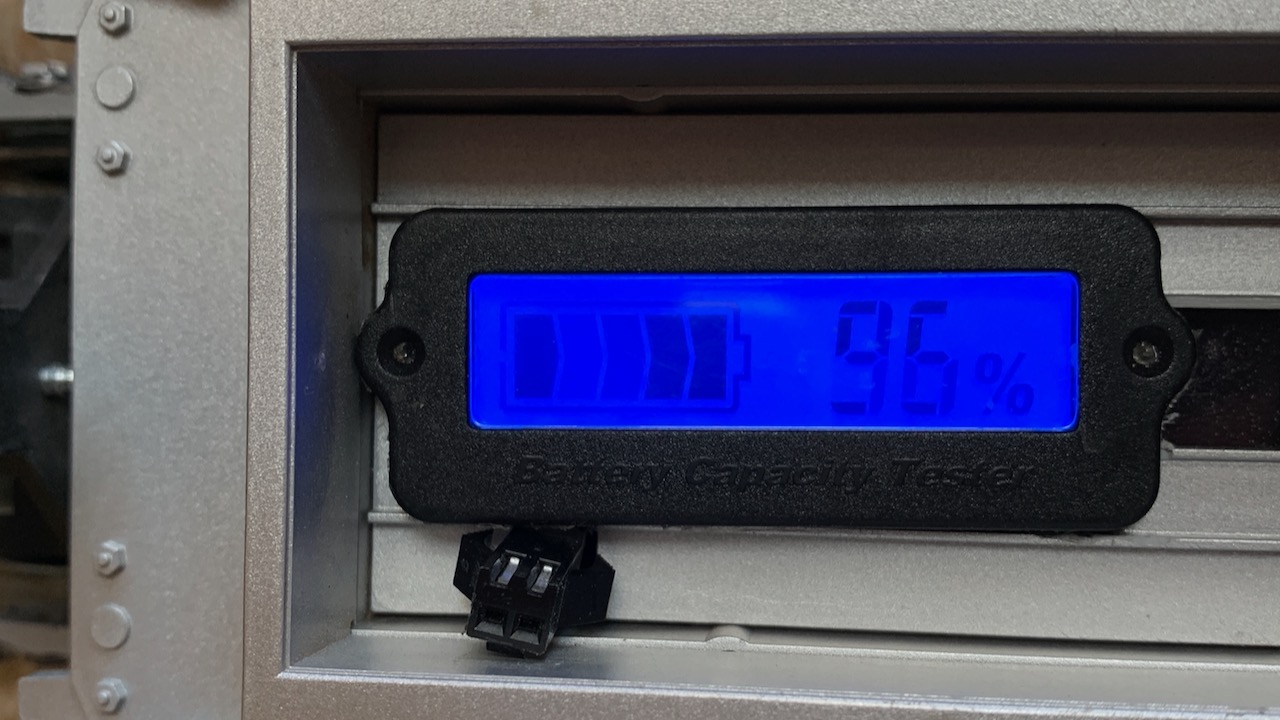 Moving forward, the speaker compartment is next - right above the speaker opening in the fuel tank. The speaker is mounted high enough to keep it dry in all but the worst conditions. 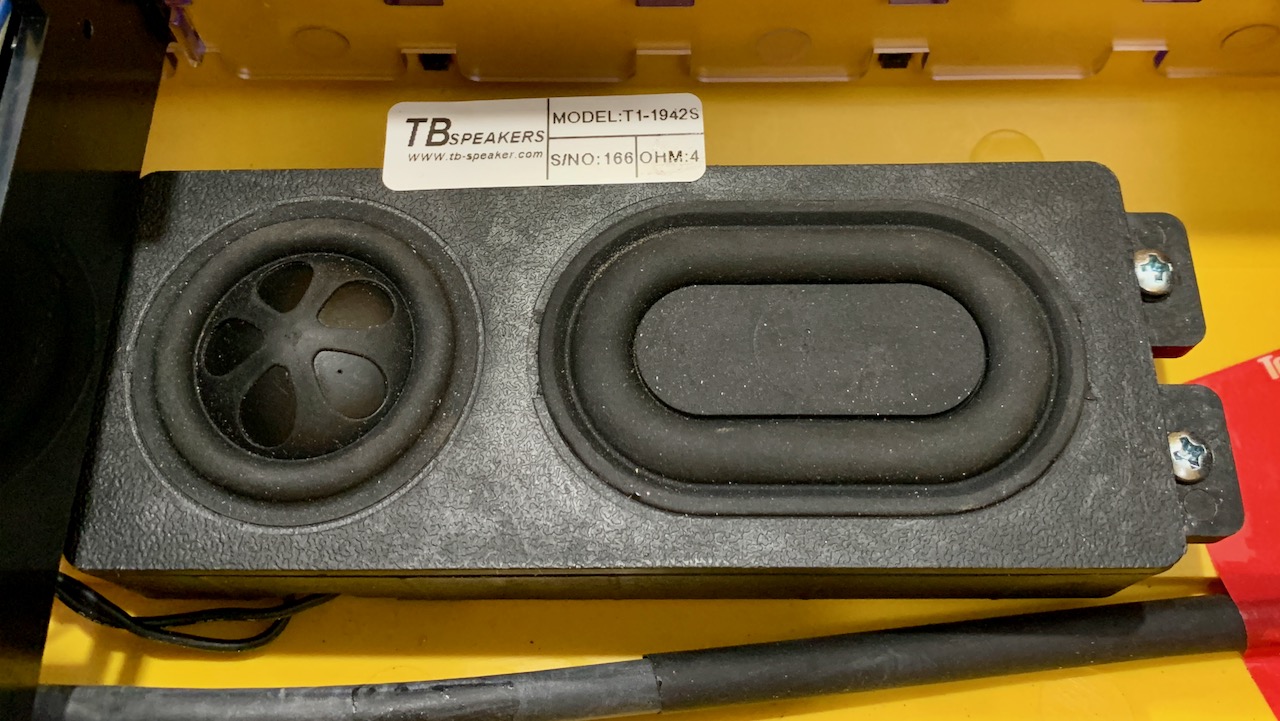 The next compartment contains the AirWire Convrtr and the DCC decoder. I like the X version of the Convrtrs, as they have an external antenna, with can be extended through the roof, allowing for longer range in the garden. The connector shown in the upper left connects the output of the decoder to the motor(s). 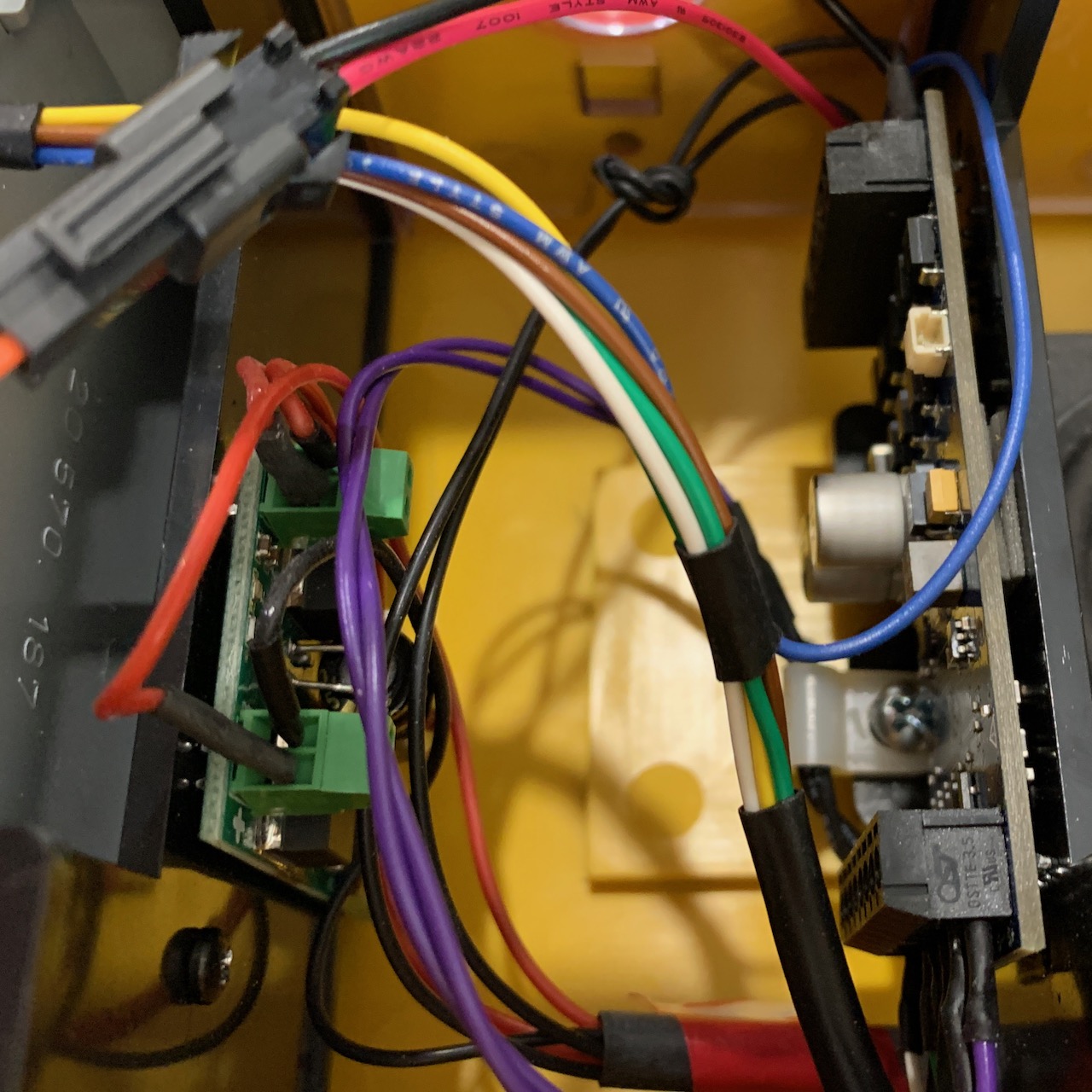 Next comes the cab and all the lights! 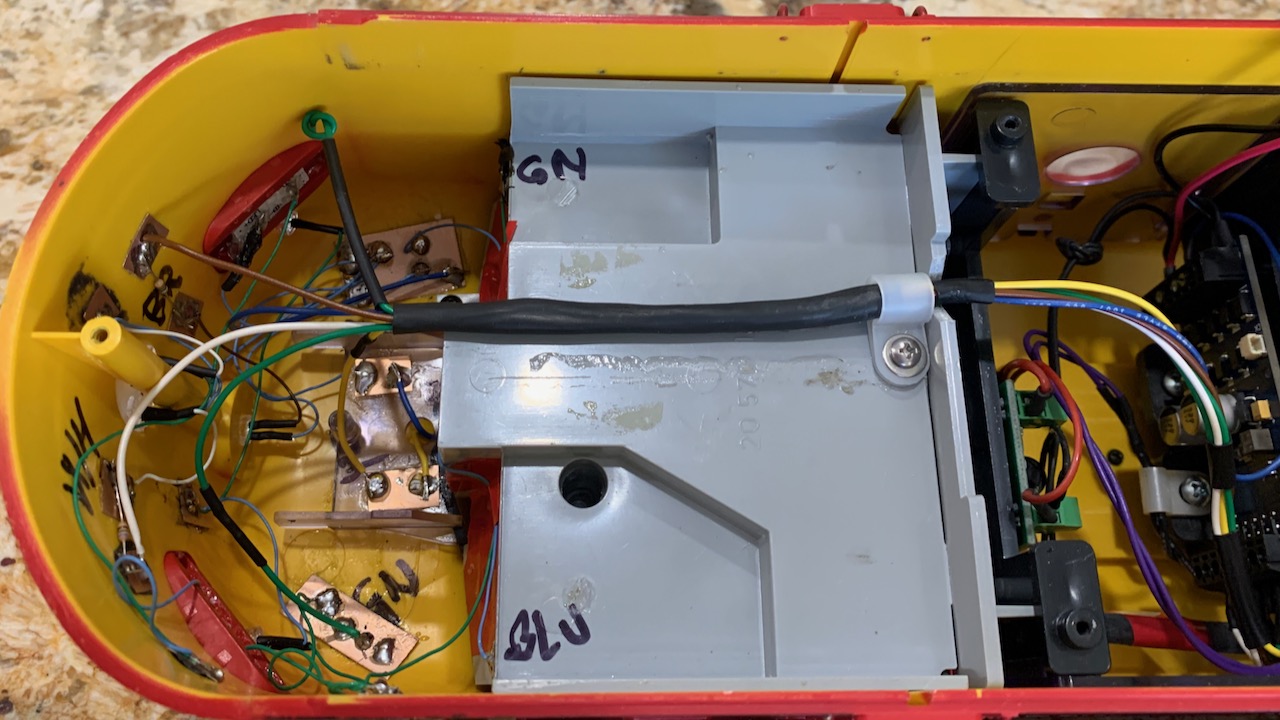 This locomotive shines, literally. I illuminated every light that was modeled by LGB, including the cab light. The cab incandescent light was replaced with a 3 LED strip in warm white. I added fireman figure (there was already an engineer). I put two 0603 SMD LEDs in the insturment clusters in front of each figure, so they will be illuminated slightly at night. Actually these LEDs are probably out of scale too bright, just to show the figures.

I'll have more later, including a wiring diagram.