I am a guy with a background in electroincs, business, customer service and adult training. As such, I founded Litchfield Station, a major DCC supplier, in 2001. Since then, I have studied railroading, modeling and DCC.

But it wasn't always like this. Yes, there were the childhood O-27 toy trains. Here is a shot from Christmas movies when I was about 7, getting my first Lionel NW2. I’m the one on the right. Who has a firm grip on the locomotive? My dad! 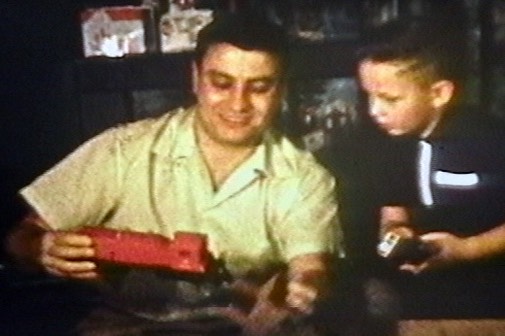 In high school, the trains went away, not to be seen again for about 35 years. With the inception of the PebbleCreek Model Railroad Club in 1998, I got into modeling and joined the NMRA.

As a part of the Detroit 2007 NMRA convention, I got a chance to sit in the engineer's seat of PM 1225 while it was under steam. This locomotive was the basis for the Polar Express in the movie. 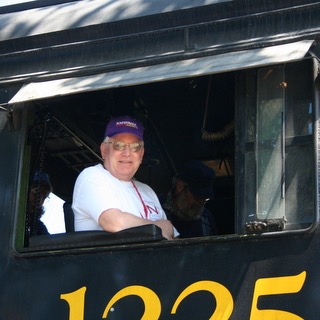 Then, at the 2011 NMRA convention in Sacramento, I went to the Western Pacific museum in Portola CA and spent some time at the controls of 2873. 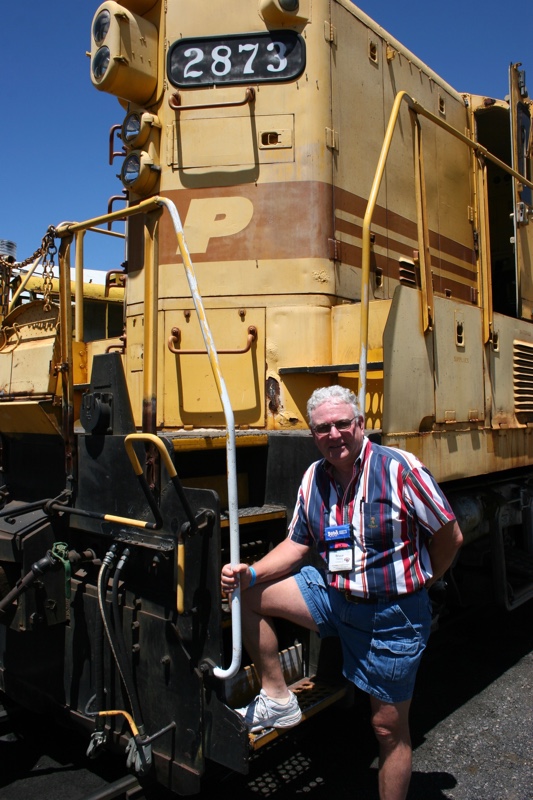 My goals in DCC are to replicate these two in-cab experiences as closely as reasonable.

The more I learn, the more I find to learn. My two decades as a NMRA member have led me to earn Master Model Railroader credentials in 2016. I am now the Superintendent and Achievement Program Manager for the Arizona Division.

+ - What can Mr. DCC do for you? Click to collapse

Based on almost 60 years of amateur radio experience and college degrees in electronic engineering and also two decades of DCC system and decoder installations, I am available to help you over the rough spots!

Working from my knowledge base and industry contacts, I can help you get going quickly and efficiently. A few dollars spent here may save HOURS and DOLLARS later.

I am an operator (who prefers car-cards and waybills), not a caboose chaser. My friends and I can help you make you layout efficient from both a DCC standpoint and track plan viewpoint. Rates are reasonable - CONTACT BRUCE for a quote.

I am available on FaceTime or Skype for consultation and assistance. CONTACT BRUCE for details.

With all the installations that I have done or consulted on in the last two decades, just another installation doesn't trip my trigger. I love a challenge. Are you looking for that something extra?

Challenge me and see what I can work out for you. CONTACT BRUCE for a quote.

If you compare, make certain that all folks subscribe to the Workmanship Standards that I initiated!

You want to do it yourself! I have compiled installation examples over the years and will be presenting them here as I can get them reformatted. CLICK HERE to see them.

How do I pay for Mr. DCC's services?

I have a PayPal account. The easiest and quickest method is for you to make payment that way. You can use a PayPal balance or any major credit card through PayPal. PayPal checks are NOT a good idea. Just like a paper check, nothing happens until the check clears, but PayPal takes their percentage out of the transaction, so we both loose!

Cashier's or Bank checks and Money Orders, work as well!

Personal checks will result in a 10 day delay. If you want to go this way, think about sending the check ahead of time. It can be running through the banking system while I am doing the work. I really hates to do this, but the only time I have been burned was when a customer of Litchfield Station sent a check and I sent the product immediately upon receipt of the check. As soon as the shipping notice went out by eMail, the SOB stopped payment on the check. Since then, I have insisted on the 10 day delay. Sorry for the inconvenience. CONTACT BRUCE with your needs and ideas.

CONTACT BRUCE to verify the correct address for your shipment. 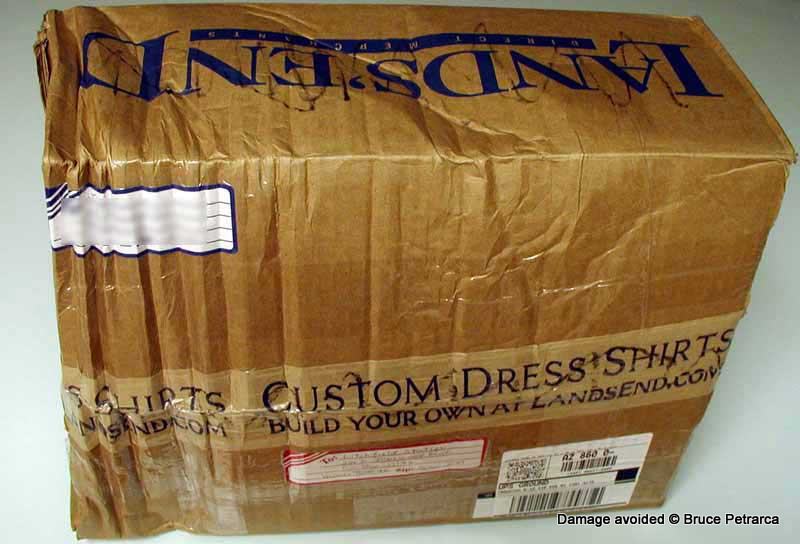 Then you need to pack your pet units carefully in the original boxes with the original constraints and padding. Tape the original boxes closed and pack them in another box withAT LEAST 2 inches of protection (foam peanuts or bubble pack or air pillows) around ALL SIDES of the original box. WHY? See this photo. This is a packaged received by Mr. DCC. The contents were just fine, thanks to the fact that the shipper followed our suggestions.

I warranty my installation labor for 90 days.

Parts with manufacturing defects will need to be handled by the manufacturers themselves.

I set the standard for workmanship at Litchfield Station!

NO STICKY, GOOEY TAPES are used in the final install.  That means:

Sometimes blue masking tape is used in the course of the install to hold things in place. Blue is preferred over regular masking tape, as it is cleaner and leaves no residue.

Only MIL-SPEC quality Kapton tape is used in the product as returned to the customer.  This VERY EXPENSIVE tape withstands very high temperatures. It leaves NO RESIDUE when removed or heated, unlike other tapes.

Shrink tubing is used to secure and insulate soldered joints wherever possible. Bruce would be willing to run his own locos with the mechanical joint and shrink tubing only, he believes so strongly in this combined approach.

Every joint is soldered with quality solder, using MIL-SPEC techniques

Every light gets a dropping resistor if recommended by the decoder manufacturer or needed for correct operation.

Wiring is routed and constrained so that it won’t interfere with moving parts. In many cases, wiring will be run in a flat bundle and held down with glue or Kapton tape in such a location that the decoder and / or NMRA plug may still be removed.

If glue is used to secure wiring and decoders, it is caulk, Aleens 7800, Goop or some similar product.

If the decoder is mounted to the motor, it is insulated from the heat of the motor.

Every loco is test run before and after installation.

Every loco is provided with a programming sheet showing what values have been set in the various Configuration Variable (CV) locations.

Every loco is checked for lubrication and has its wheels cleaned and has an application of conductivity enhancer prior to shipment. Bruce uses Nano-Oil and Never Stall.

Ask your installer about his WORKMANSHIP STANDARDS. Compare thier answer to mine.

+ - History of Litchfield Junction, Depot and Station Click to collapse

First There Was Litchfield Junction

The Goodyear Tire & Rubber company began growing cotton for tire cord in the Phoenix AZ area in the early 1900s. Bill Litchfield, a relative of the Chairman of the Board at the time, was sent out to run the operation. Bill built a city for the workers (the beginnings of the current city of Goodyear) and a place for the managers (now called Litchfield Park). 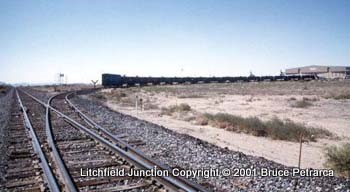 The Litchfield Branch of the Southern Pacific left the Phoenix division mainline in Goodyear at Litchfield Junction, as shown in this aerial photo of the Goodyear-Phoenix airport. The mainline runs from the center right of the photo to the lower left. The branch runs due north from the WYE just above the white lettering. This 5.4 mile branch was used for loading cotton and taking the executives to Litchfield Park where their business cars were parked. The turnouts were removed from the mainline in 2009. 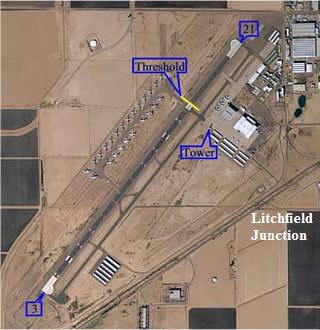 Then There Was Litchfield Depot

A depot was erected about 1/4 mile east of Litchfield Junction (just off the right side of the aerial photo above) and called Litchfield. 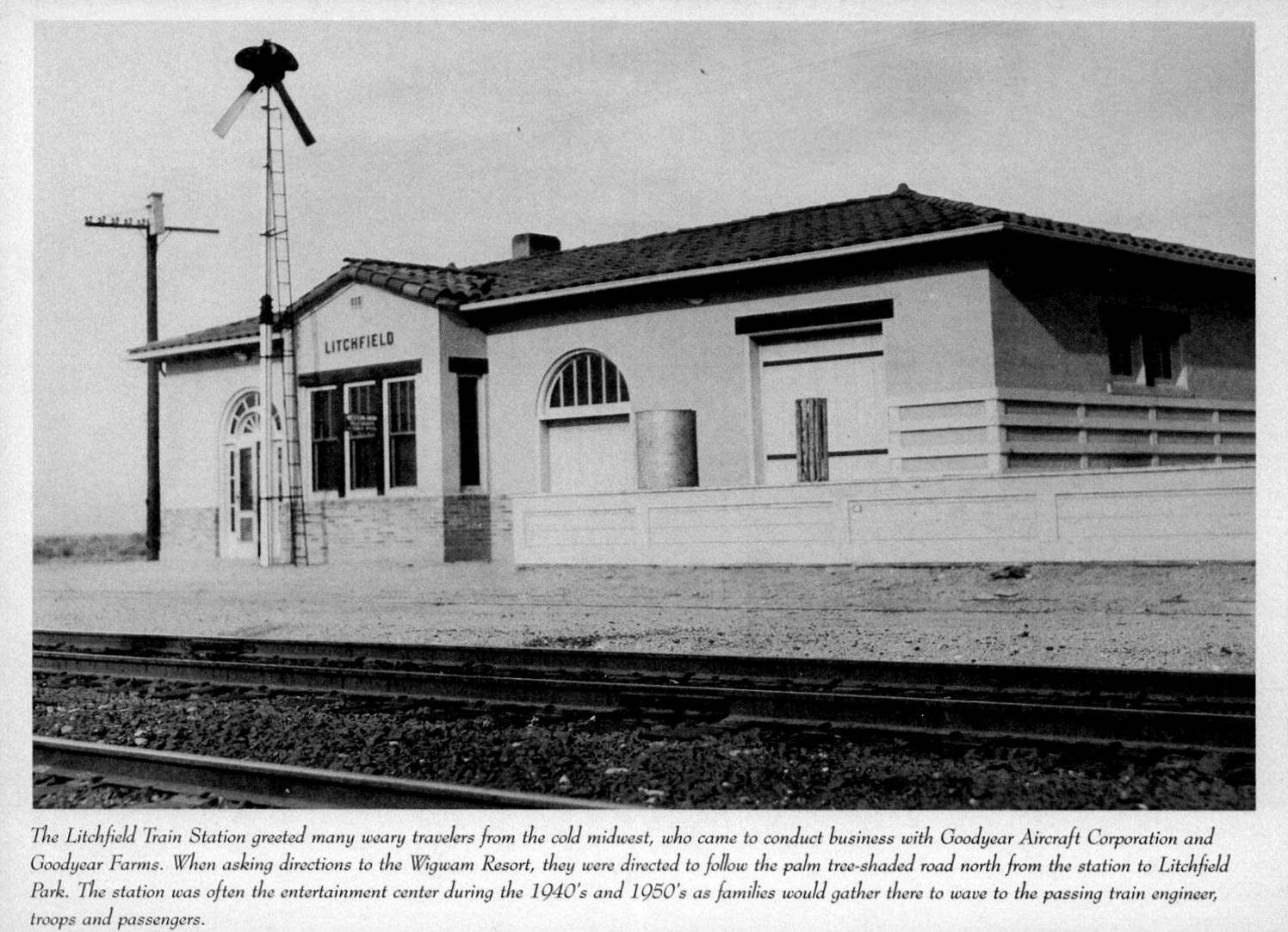 This depot served the Southern Pacific railroad for many years. Here is a historical photo of the north side - away from the tracks.

With SP out of the passenger business, it didn't need a depot. It was abandoned and sold. It was moved to a farmer's field a few miles west of its original location and used as a stable and warehouse!

Here is how Litchfield Depot looked in 2001.

In February 2009, the depot moved again! The City of Goodyear purchased the depot and moved it to a temporary storage location while they decide what to do with it.

Here is the depot as it awaits its fate, sitting in a city maintenance yard. It has been a decade and it is not looking good for renovation. Seems as if the city wasted a lot of money here. 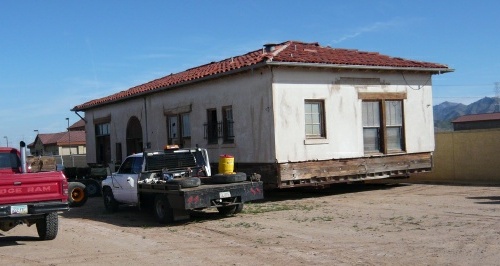 Then there was Litchfield Station

Since Bruce & Linda's residence is about a mile west of the terminus (Litchfield Park) of the Litchfield Branch, we decided that the name had a nice ring and decided to use it for the business Bruce created in 2001 (with the appropriate D.B.A. from the Arizona Secretary of State). Since depot refers to a physical building and station refers to a stop, we decided to use Litchfield Station. For most of our customers, we were a stop along the internet, not a physical presence.

Bruce started Litchfield Station in 2001 to do a few decoder installations. He operated the business out of his and Linda's residences in the Phoenix area (winter) and near Flagstaff (summer). Adding DCC related items increased the business over the years.

Then, in 2006, Linda broke her foot and was unable to continue working on ladders (she was a professional faux finisher and muralist). Bruce needed help and talked Linda into joining him in the business.

In 2007, Bruce and Linda sold their summer home near Flagstaff and moved Litchfield Station into commercial quarters in Avondale, near their (now year-round) home. They began advertising internationally and seriously promoting the buisness. 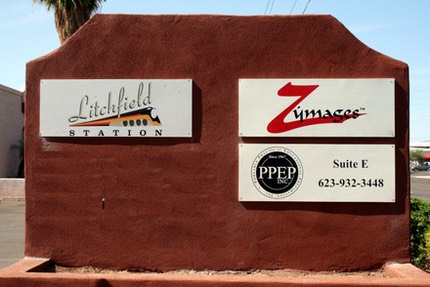 As the business grew, folks were added. By April of 2008, we had a team of folks an were on our way to being the second largest DCC retailer in the world.

In early 2010, Bruce & Linda and most of the team members decided to retire. Jack Baer purchased the business and has kept it in the same place!

Throught the summer of 2010, Bruce moved the Mr. DCC's University data from the Litchfield Station site to this site.